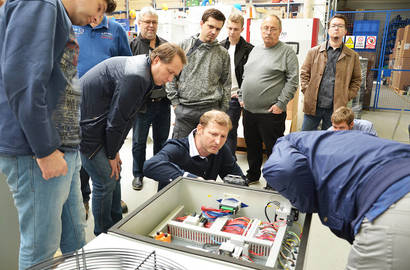 On Tuesday, October 24, 2017, a training on the new TAEevo TECH chiller series (TECH 015 – 802; new verison TAEevo MINI) was held on the Ship Brewery, and it was not only theoretical.

Participants were also presented with a practical demonstration of putting TAEevo TECH into operation with an emphasis on possible pitfalls. The lecture was led by Jan Půlpytel, who added also interesting information about the water quality in circuits and introduced the antifreeze liquid ZITREC FC.

The new TAE4FC and FC4ALL series, including the selection of suitable equipment from the catalog, were introduced to the participants by Radek Mikšíček. Petr Hýsek spoke about the new ARIES TECH HE serie, the potential of waste heat utilization and also about the dismountable heat exchanger from the view of the new perspective in industry. Legislation to control the leagake of f-gasses in refrigerant circuits in connection with the chiller service inspections was the main theme of the lecture by Jiří Rach. 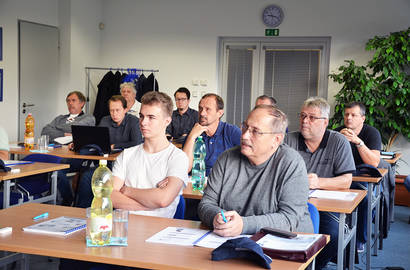 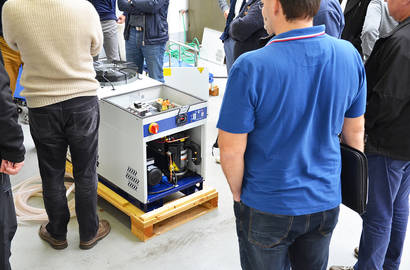 The design of the MINI units combines the aim of ensuring class-leading performance with the highest reliability of the components. The innovative finned coil evaporator ensures reliable operation even in demanding applications. Thanks to the non ferrous hydraulic circuit the MINI chillers are able to work even with fluids aggressive to carbon steel, maintaining maximum quality and cleanliness of the process fluid.

Easy installation
Thanks to their compact dimensions MINI units fit easily even below of a workbench. The robust structure with eyebolts allows lifting the unit by means of straps with hook. Thanks to the dual frequency design the M02 - M03 models are ready for 50Hz and 60Hz applications.

Easy maintenance
The rational layout of the hydraulic components, the simplicity of the refrigerant circuit and the numbering of electric cables simplify the operations of checking and maintenance, which can also be performed with running unit. The disassembly of the condenser air filters for the periodic cleaning operations is facilitated thanks to the fastening system interlocking. The mod. M08-10 are equipped with a green light steadily on under normal operating conditions and red in alarm condition.

Extended operating limits
The wide operating limits allow MINI units to operate even under the most extreme conditions. The maximum temperature water inlet and minimum water outlet are respectively 35°C and 0°C. TAEevo Tech MINI can operate with high ambient temperatures up to 45 ° C.

Other news from department 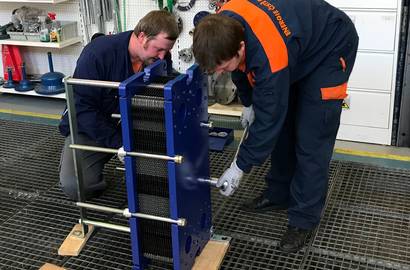